Version 3 end of life
This version of Silverstripe CMS will not recieve any additional bug fixes or documentation updates. Go to documentation for the most recent stable version.

This tutorial is intended to be a continuation of the first two tutorials (first tutorial, second tutorial). In this tutorial we will build on the site we developed in the earlier tutorials and explore forms in SilverStripe. We will look at custom coded forms: forms which need to be written in PHP.

Instead of using a custom coded form, we could use the userforms module. This module allows users to construct forms via the CMS. A form created this way is much quicker to implement, but also lacks the flexibility of a coded form.

What are we working towards?#

We will create a poll on the home page that asks the user their favourite web browser, and displays a bar graph of the results. 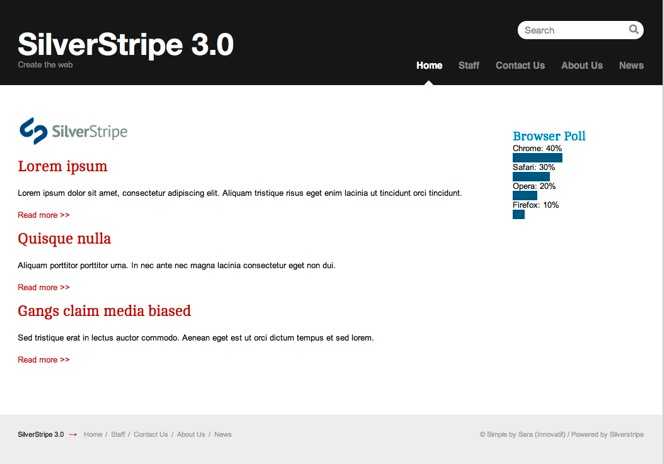 The poll we will be creating on our homepage will ask the user for their name and favourite web browser. It will then collate the results into a bar graph. We create the form in a method on HomePage_Controller.

First we create our form fields. We do this by creating a FieldList and passing our fields as arguments. The first field is a TextField with the name 'Name'. There is a second argument when creating a field which specifies the text on the label of the field. If no second argument is passed, as in this case, it is assumed the label is the same as the name of the field. The second field we create is an OptionsetField. This is a dropdown, and takes a third argument - an array mapping the values to the options listed in the dropdown.

Finally we create the Form object and return it. The first argument is the controller that contains the form, in most cases '$this'. The second is the name of the method that returns the form, which is 'BrowserPollForm' in our case. The third and fourth arguments are the FieldLists containing the fields and form actions respectively.

All going according to plan, if you visit http://localhost/your_site_name/home/?flush=1 it should look something like this: 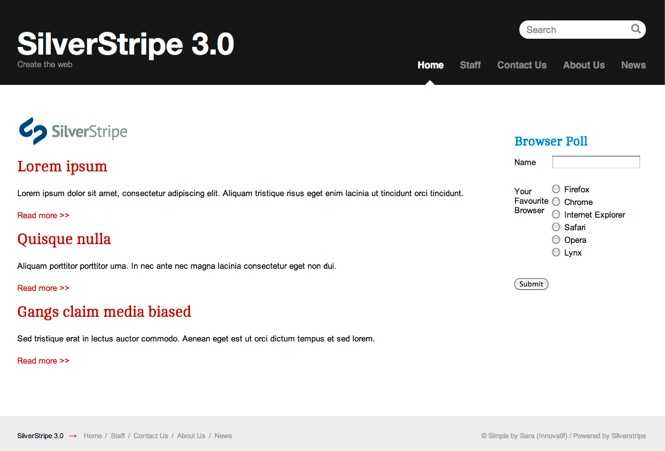 Great! We now have a browser poll form, but it doesn't actually do anything. In order to make the form work, we have to implement the 'doBrowserPoll()' method that we told it about.

First, we need some way of saving the poll submissions to the database, so we can retrieve the results later. We can do this by creating a new object that extends from DataObject. If you recall, in the second tutorial we said that all objects that inherit from DataObject and have their own fields are stored in tables the database. Also recall that all pages extend DataObject indirectly through SiteTree. Here instead of extending SiteTree (or Page) to create a page type, we will extend DataObject directly:

A function that processes a form submission takes two arguments - the first is the data in the form, the second is the Form object. In our function we create a new BrowserPollSubmission object. Since the name of our form fields, and the name of the database fields, are the same we can save the form directly into the data object. We call the 'write' method to write our data to the database, and '$this->redirectBack()' will redirect the user back to the home page.

SilverStripe forms all have automatic validation on fields where it is logical. For example, all email fields check that they contain a valid email address. You can write your own validation by subclassing the Validator class.

SilverStripe provides the RequiredFields validator, which ensures that the fields specified are filled in before the form is submitted. To use it we create a new RequiredFields object with the name of the fields we wish to be required as the arguments, then pass this as a fifth argument to the Form constructor.

Change the end of the 'BrowserPollForm' function so it looks like this:

Then we simply need to check if the session variable has been set in 'BrowserPollForm()', and to not return the form if it is.

This code introduces a few new concepts, so let's step through it.

We get the total number of submissions, which is needed to calculate the percentages.

Here we first check if the BrowserPollForm is returned, and if it is display it. Otherwise the user has already voted, and the poll results need to be displayed.

We use the normal tactic of putting the data into an unordered list and using CSS to style it, except here we use inline styles to display a bar that is sized proportionate to the number of votes the browser has received. You should now have a complete poll.

In this tutorial we have explored custom php forms, and displayed result sets through Grouped Lists. We have briefly covered the different approaches to creating and using forms. Whether you decide to use the userforms module or create a form in PHP depends on the situation and flexibility required.